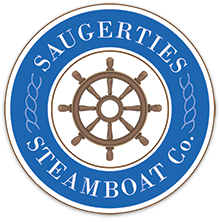 The home of The Saugerties Steamboat Co. is filled with rich history, linking it to the Hudson River and the historic Village of Saugerties. The three-acre waterfront property is where many Saugerties residents stepped ashore from the greater New York City area to settle. The site was originally developed in 1830 when the Village of Saugerties obtained its own steamboat line, making a direct connection between Saugerties and New York City for the shipment and trading of goods. The first steamboat on the line was the Ansonia, later named the Robert A. Snyder. The Vessel operated for 65 years as the central steamboat line between Saugerties and New York City, carrying both passengers and freight to and from the city.

The site was later incorporated as The Saugerties and New York Steamboat Company in 1889 by Henry L. Finger, Snyder James, William Maxwell, and John and George Seamon. Two other steamboats worked the Hudson alongside the Robert A. Snyder; The Shenandoah (later called The Saugerties), and The Ida. The Saugerties caught fire, and was towed to the Saugerties Lighthouse cove, where remains of the vessel can still be seen at low tide. In later years, the rise in utilization of trains and automobiles led to a decline in the need for steam ships and river traffic. In the 1930’s the property was acquired by the Lynch Family and used as a commercial docking space and restaurant for many years.

In 2015, Ulster County resident and entrepreneur, Thomas Struzzieri, purchased the property to establish the Saugerties Steamboat Co. with a vision to develop the underutilized marina as a center that will give visitors a chance to discover and experience the Hudson River in a new way.

SSCo. Restaurant is closed - visit us year round at The Tavern at Diamond Mills!View Website
MENU